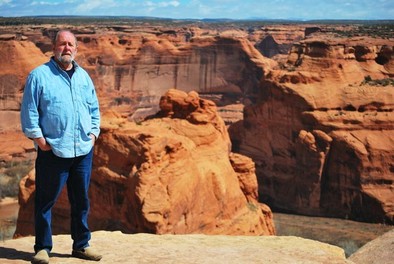 Self-portrait, Canyon de Chelle in Northwestern Arizona, Navajo Nation
Tim Kithcart fell in love with photography when he got his first Brownie camera. His interest grew as he started backpacking in the Olympics and Mount Rainier National Park and he took his camera along. Since then he's been taking pictures of his world with everything from a Minolta to his current Nikon D60, 70, and 80. Tim's love of rock and blues-influenced music has led him to photograph artists at work in various nightclubs and other venues. Tim has been able to meet and share photos with some of his favorite guitarists.
"I try to capture images that are representative of the environment I see. The photo has to move me and be pleasing to my eye. Photos are my labor of love and the people who enjoy my images make all my work very rewarding."

© All images are copyrighted. They cannot be used in any form, for any reason, without specific permission from Aaron or Sharon Kithcart. Any use of these images outside the guidelines set by the Fair Use Laws for Copyrights of the United States of America is strictly forbidden. All use permission must be obtained in writing from Aaron or Sharon Kithcart.